ANNE BOSMAN: Simple is not Boring 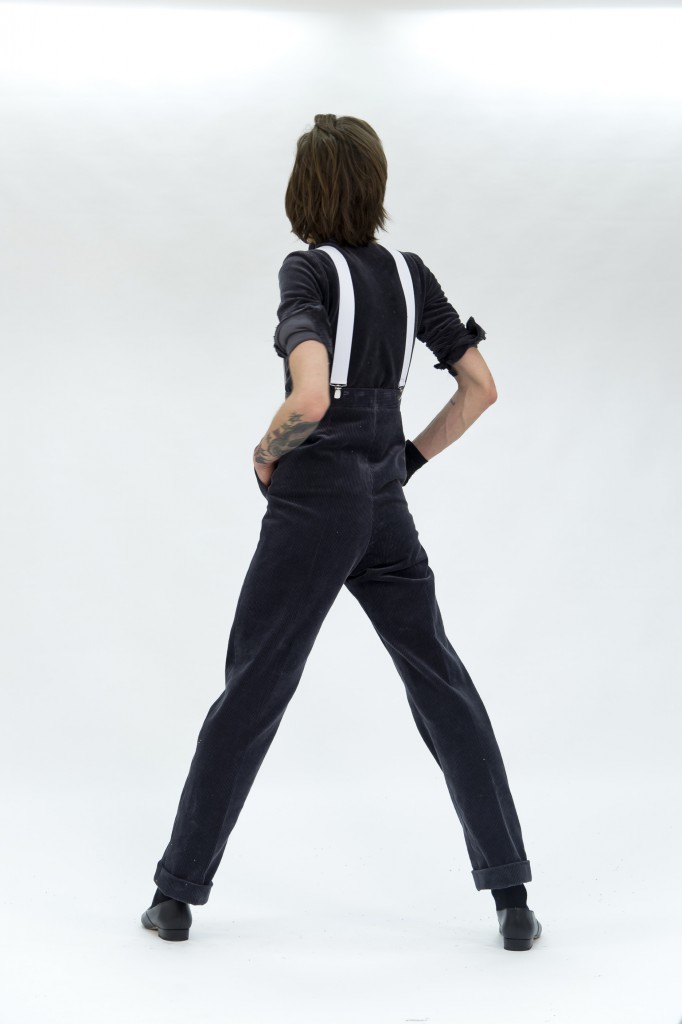 He was top of his class at Artez art academy in Holland and winner of an H&M design award with his BA collection. Now menswear designer Anne Bosman is completing an MA at Central Saint Martins and is emerging as Holland’s fashion hope for the future.

We meet in the library of Central Saint Martins, surrounded by students dressed in the brightest colors, styled to impress. Bosman, however, is wearing simple blue jeans and a black sweater – “working clothes” as he describes them. From his wardrobe to his Dutch Old Cheese, Bosman is a down-to-earth kind of guy.

He’s nervy, a little uncomfortable, in interview. Asked to describe himself in five words he swiftly replies: “Anne, 4 letters, I am a boy.” He goes on to explain: “They always think I am a girl because of my name. So if they know I am a boy, that’s the first step to getting to know me.”

Let’s try the question again. Apart from being a boy named Anne, how would you describe yourself in five words, character-wise? “I’m Dutch, traditional, naive, love science fiction and football.”

More surprise. A fashion designer who loves football! “When fashion drives me mad, I go and watch a game, preferably Champions League,” he says. But the designer’s mind is still at work. “Did you saw the 2004 away shirt from Ajax? It was a drama. I mean, light blue! You always hope at the start of the new season that their shirts look great, that your favourite team at least looks nice.”

Born in Amsterdam, his favourite club is Ajax, the city’s team. Bosman loves the Dutch city of canals and cafes and creative energy: “I always thought that there could never exist a city as great as Amsterdam, but I must say that London comes close. I feel London is Amsterdam, but then ten times as big.”

He grew up in Deventer, a city in the Dutch province of Overijsel. He was raised in an old-fashioned Dutch way; his mother packed his lunch for school; he ate typical Dutch dinners every night like potatoes, meat and vegetables; his friends came over regularly. His mother was full time at home, while his father ran a text-communication and journalism bureau focusing on politics and non-profit organisations. Bosman’s younger brother followed in his father’s footsteps and now studies journalism.

Bosman, however, chose another path, outside his comfort zone. He grew up in a family that had no particular interest in fashion and he hardly knew anything about the industry. What does fashion mean to him? “It’s a strange obsession for craftsmanship, handicraft. To me, fashion is art close at hand.”

All Bosman knew at the beginning was that he wanted to go to an art academy because they would let him draw. He loved drawing at high school and spent more time on his art then the rest of his homework. “When I was 16 I thought that when you went to art academy you could be creative and draw the whole day. I had no idea you could chose different pathways.” He eventually chose Artez because it offered a pathway which was “just drawing, drawing, drawing.”

Why didn’t he become a painter or illustrator if he loved drawing that much? “When I was young, I wanted to be an industrial designer,” he explains. “I also really wanted to become an architect but it involved too much maths. Artez offered the possibility to learn a profession; that of tailor, which seemed interesting to me. I now see fashion as architecture on the human body; it is all about the styling, lines, the right colours and materials. And it’s interesting that you work in 2D. Only when you try the design on, it becomes 3D. That’s something you don’t see with product design – it stays 3D all the time.”

He learned to be a designer at Artez in a traditional way, very hands-on, developing a great interest in both traditional craftsmanship and new technologies, the latter explaining his interest in science fiction or, as he calls it, “the new”. But he’s not an uncritical technology obsessive – he waits to be impressed. “New technologies are great but I always feel it takes time before they’re perfect… The first bank card took ages before it worked properly, trouble-free. New technologies need to convince me that they work; only then will I use them.”

At Artez, Bosman achieved the foundation he needed, learning more about fashion and design. In his second year, he became interested in menswear because of a project commissioned on the subject: “It went so easily and automatically that I made the decision to focus my career on menswear.”

His favourite designers are Lucas Ossendrijver for Lanvin, Raf Simons for his own menswear line, and designer duo Viktor & Rolf, all Dutch-speaking designers. What is it that makes the Dutch and Flemish so attractive to Bosman? “I don’t know,” he shrugs. “Maybe it’s just the Dutch taste; raised with the same milk, same bread, same taste?”

Bosman finds inspiration from visiting exhibitions and museums, and from reading unusual anniversary books, such as 100 Years of Fisherman Sweaters. His three favourite movies of all time are Star Wars, The Godfather and Finding Nemo, touching the three genres of science fiction, gangster and animation. “Finding Nemo is so simple, I love the colours and the adventure. It is a fantasy that stimulates all the senses, a kid’s version of a serious cult film. The Godfather is amazing, the style, the setting. Star Wars is a view into the future which is fascinating… As a designer, this is exactly where I would like to be, in the midst of the new, the traditional and the naive.”

Bosman graduated in 2012 from Artez with a BA collection inspired by dictators and emperors, big and powerful. A collection of pictures of Japanese emperors in kimonos reminded him of his own childhood running through the garden wearing his father’s jacket, feeling huge. “Children who wrap fabrics around their body to create their own sculptures. I wanted to recall that feeling for grown-up men”. To research his silhouettes, he used oversized kimonos in combination with other fabrics, while rescaling baby clothing to adult proportions.

The collection was nominated for the H&M award, which he eventually won, receiving 5,000 Euros and an internship in London at designer Christopher Kane (who also studied on the MA fashion programme at Central Saint Martins). During his month there, Bosman did not learn much about fashion design as he was placed in the production team. However, looking back, the experience was very valuable as it gave him a chance to live and experience London. “I fell in love with the city,” he says simply.

Thanks to the award, Bosman finally had the resources to apply for the MA: “CSM was always my dream but I had no money. Then, all of a sudden, H&M gave me half of the annual CSM fee – it was a dream come true”.

He was delighted to secure an interview with course director, Professor Louise Wilson. That, in itself, was no small achievement: most students are rejected on their portfolio alone. Bosman took his portfolio and two of his BA collection pieces. “It was just an interview,” he recalls. “Questions and answers.” Silence. “I just don’t know if this is interesting to tell. It was a normal conversation, she was very honest, telling me what she liked and didn’t like. What was ok and what needed approval. It was exactly what I expected; I did not expect her to say that all was good and nice. I expected her to be honest and she was. She said that it was ok but not good enough and that if I got accepted to the MA, I needed to realise that this was not the level on which I could continue. But I was like, yeah, that is exactly why I want to do this masters, to become better and improve myself.”

Like many of the MA Fashion students, Bosman is very protective of Professor Wilson, and for good reason. “When you actually do this MA, you work in the studio and have conversations with Louise – you hear what is actually said – interviews put her words so out of context. She has got this English sarcasm; you need to be aware of the context, what happened in advance… It’s the same with Artez. I know 10,000 stories about my BA. When I tell them to my classmates at CSM, they are shocked – were the teachers really like that? But you need to know how to interpret these teachers. It’s all about context.”

He adds: “I think that what Louise does comes straight from her heart and that can appear confrontational for people who don’t know her… Journalists make up a story, they create an image around her. But you know what I would like? To read an article about Louise written by herself.”

During his time at CSM, he learned a lot from her. “It’s as people say, it is both physically and mentally tough, working day and night, without much time for fun.” When he looks back on his BA collection, he would have done many things differently: “I tried to fit in so many techniques in my BA collection. I added way too much. Two BA pieces could have been two whole collections.”

The best lesson he’s learned at CSM is that simple is not boring: “I was always so afraid of that. I always thought my designs had to be bigger and better. But I’ve learned at CSM that a simple design can be great as well. Little details can be fantastic. Keep it simple – a good design can be a simple t-shirt with a different seam. That is also what I love, what I would buy.”

Bosman is completing an MA collection inspired by the work of David Bowie and artist Sol Lewitt. “Silhouettes of David Bowie in corduroy, different lines and rhythms. With worn-out fabrics and textiles; flat, dull and frosted.”

He says: “It’s a whole process. I always made overalls, so Louise said maybe I could do something with that – make an overall collection. She advised me to visit the David Bowie exhibition in the V&A for inspiration, so that’s where Bowie came into my collection. My collection evolved in that way… My goal with this collection is to create simple creations that can generate one great, powerful look.”

Bosman’s goal is to create clothes that make others happy: “My ultimate dream would be to start my own business – my own fashion house.” But first he would like to start at a well-known fashion house, preferably in London: “Burberry, Paul Smith, Christopher Kane, Jonathan Saunders or Peter Jensen – I don’t care!”

Like so many young creatives who have studied in London, he would love to stay in the city. “If I could stay here for a few more years that would be a dream, but without a job or money that isn’t an option. Life is happening in London at the moment. The music, the parties, the culture – London city, it bubbles!” 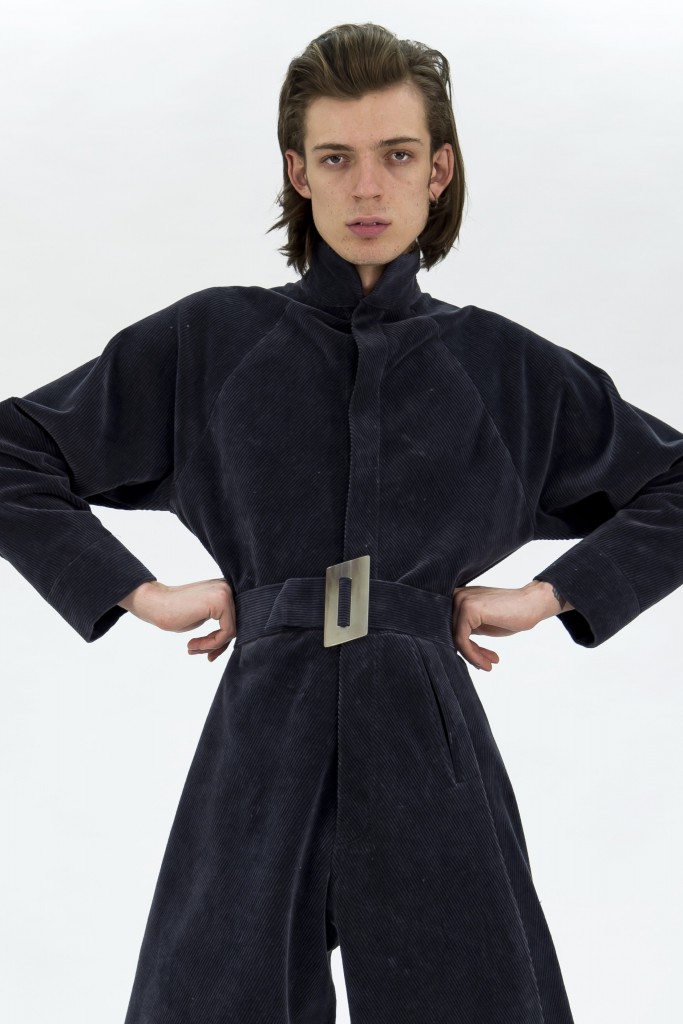 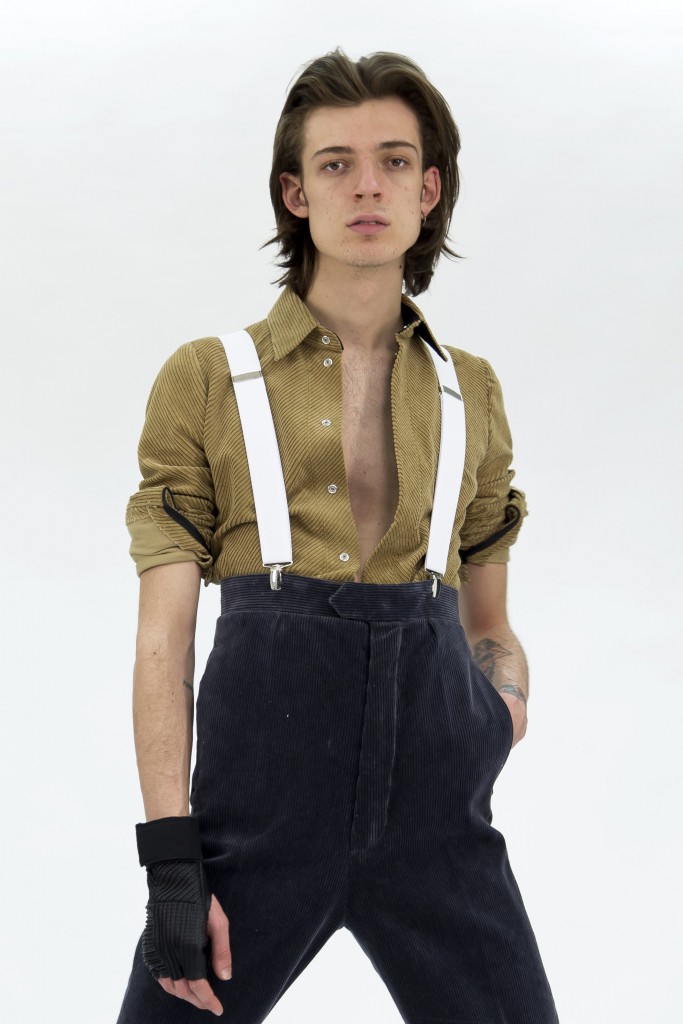 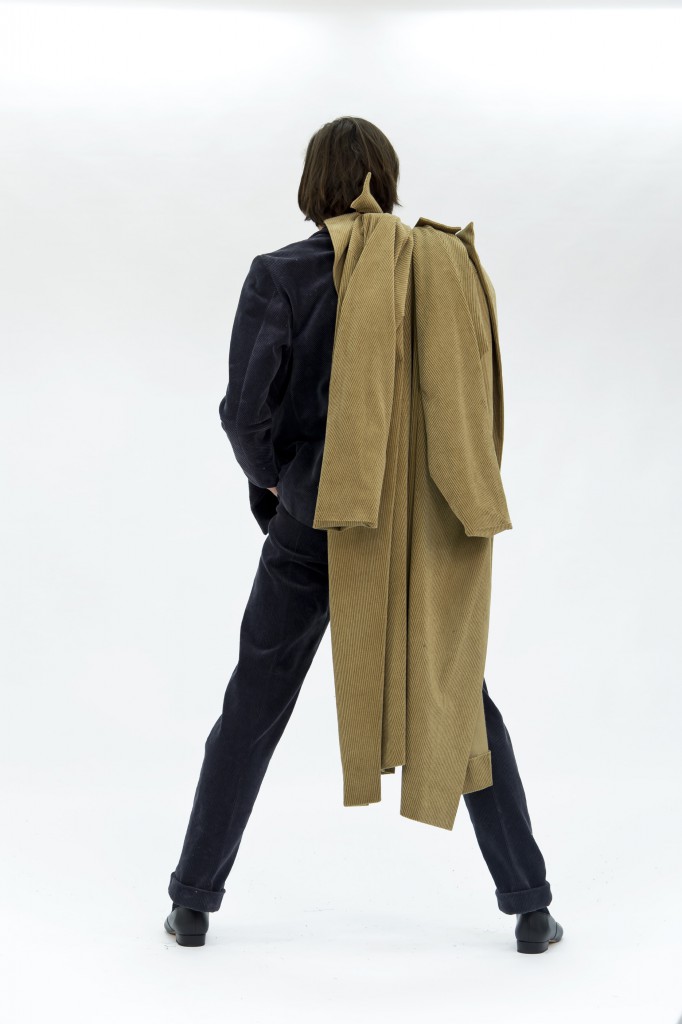 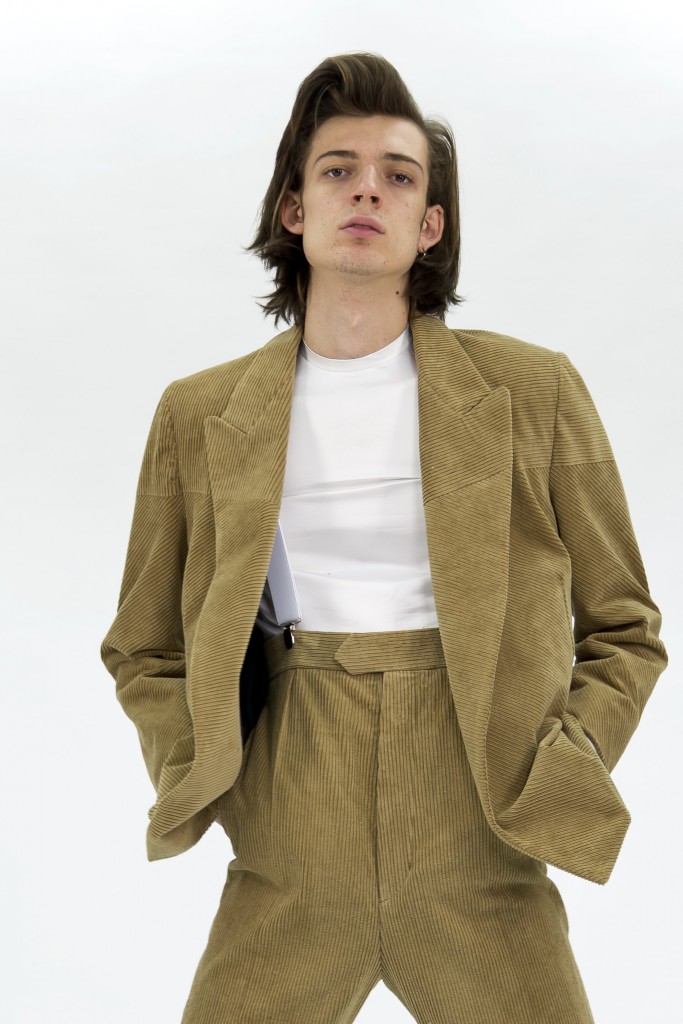 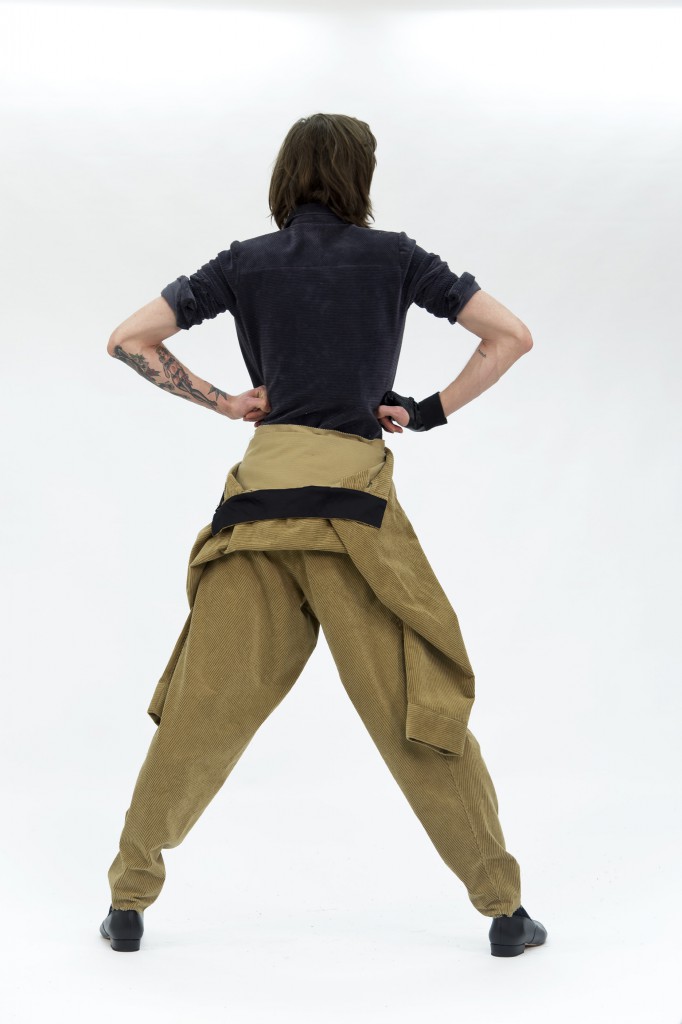 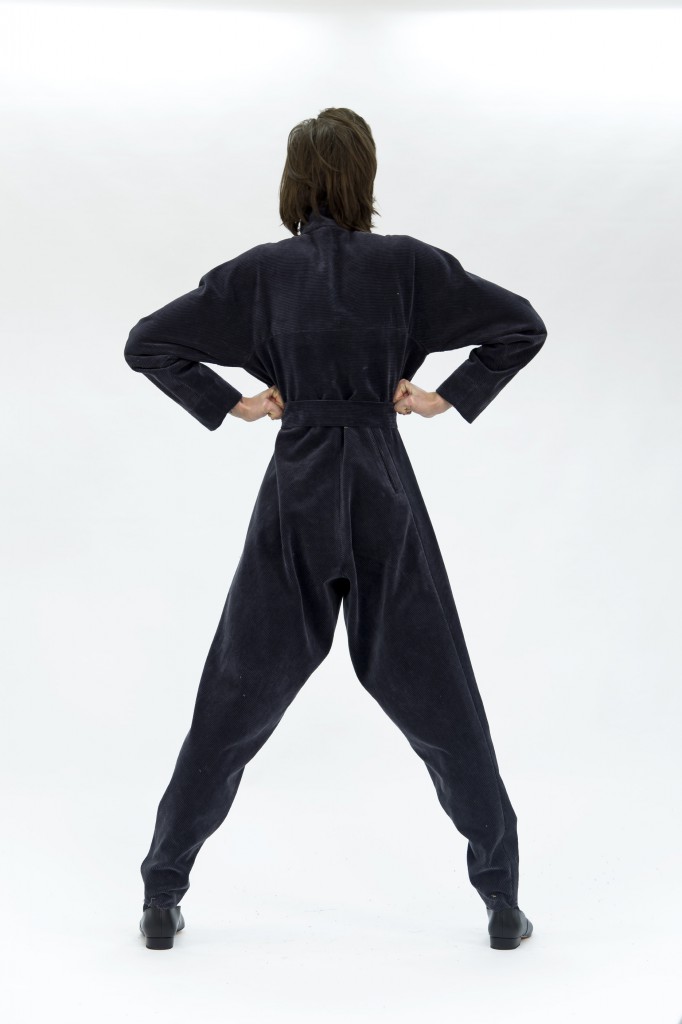